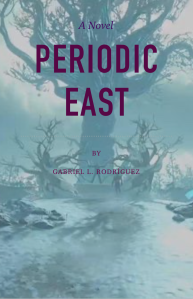 The four men entered a room about the size of a small walk-in closet. A sole console with only one large button was at the center. They all stared at the button momentarily in silence. Simon didn’t know it yet, but the other three men, the three highest-ranking political figures left on the planet, knew exactly what it was. It was what would stop reality forever.

“How is this supposed to work?” Simon asked.

“Quiet, Patrick; show some respect,” President Eastman snapped back. Sans remained quiet and the four men continued to stare in silence for another minute.

“Mr. President,” General Keats began, “you are the only person who can press that button, sir.”

Eastman took a deep breath and looked over at Simon who hadn’t made another sound and had barely been breathing.

“Simon,” President Eastman began, “why don’t you tell us a little about yourself.”

Simon looked at him with confusion. “What would you like to know, Mr. President?” He asked.

“Well first of all, you can drop the formalities. Call me Mike,” he said with an exhausted smile. He then pointed to the Vice President before saying, “This is Patrick,” and then pointing to General Keats, “and this is Frank.”

“It’s nice to meet all of you,” Simon said without remembering that he had met, seen, and even interacted with all three men almost daily for the last twelve weeks.

Keats almost cracked a smile and said, “Mike asked you a question, son.”

“Right,” Simon began, “I’m originally from New Orleans. I’m a true New Orleanian through and through. I studied at Loyola University.”

“What about your family, Simon?” Eastman asked, “Where are they? Have you been able to contact any of them in the last few days?”

Simon sighed. “My sister died a few days ago in Scotland,” he began, “parents also.” A tear streamed down his face. “I have a brother-a twin-on Icarus.”

Simon didn’t think it was possible, but the room went even quieter than before. The four men looked at each other and then the button.

“You have a brother on Icarus,” the Vice President started, “did I hear you right?”

“Did you get to talk to him before he launched?” Keats asked.

“No, sir. I was… it’s complicated, but I hadn’t seen or spoken to any of my family for most of my life. But he’s the only surviving family I have left and I’d love to talk to him; just to let him know that I’m okay. For however much longer I have.”

The president looked at his Vice President and top General and instantly made a decision. He started walking back the way he came with more determination than anyone had seen in some time.

“Come with me,” Eastman said.

Simon followed behind and the other men started to follow, but Eastman turned back and said, “You two stay here.” He looked over at the Vice President and said, “I am resigning my position as President of The United States effective immediately and invoking the 25th Amendment.

“You can’t do that, sir,” Vice President Sans began, but Eastman kept talking.

“Don’t interrupt me. I know that legally this is not how this is done, but who’s going to argue? Right? You just said we won’t have a history in the next few minutes anyways. I am going to take Simon somewhere classified-“

“Classified?” Keats repeated, “What are you talking about, sir?”

“The pod,” Eastman said. “I”m taking him to my pod. He’s going to be the one to use it. Anyone want to object? Go ahead and stop me.”

The two other men just stared back blankly.

“Good.” Eastman said and looked at Simon, “Come on.”

Michael Eastman and Simon Ng made their way back into the War Room and up the stairs and through the titanium doors back into the main ground floor of the White House. They hadn’t seen any other person and didn’t expect to. They went out the Oval Office and into the President’s Residency. Then they made their way into the master bedroom.

“Help me with this,” Eastman said as they both shifted the bed over. There, Simon saw an imprint of another opening.

“How many secret compartments and bunkers does this place have?”

“It has built-in coordinates to go straight to Icarus. No matter what you touch on this thing, it won’t deviate off course. You have water and food to last you a few weeks, maybe a month if  you ration smart, but I have no idea where Icarus is right now. You might make it, you might starve to death before it gets there. You might explode the minute this thing launches. You might get hit by space debris and explode then. I’m not trying to talk you out of this, I’m just telling you everything the engineers told me.”

“They also told me that if there’s a leak or failure in life support, you’ll die. I can’t calculate the exact probability of the success of this thing, but it’s likely less than 50%.”

“Why are you offering this to me, sir?” Simon asked.

President Eastman had tears now rolling down his face. “I had to watch my family die,” he began, “but at least I was with them in the end. You deserve to be with someone. And, if you’re really lucky, you just might have a shot of a real future.”

“Will Icarus know I’m coming?” Simon asked. “Is there any way that I can communicate with them en route?”

“No, and there’s a reason for that. If they don’t know you’re coming, they won’t have to decide whether or not to change course to try to intercept you and risk the lives of everyone on board. Also if you don’t make it, no one, especially your brother will be the wiser. But if you do make it, boy what a story you’ll tell. Keats and Sans are wrong; history will survive. And you will be the one to tell it.”

Eastman put his palm down again at the center of the opening and a panel slid open. He looked at Simon and said, “It’s your decision, son.”